Colic due to oesophageal obstruction

Atila is a 20 year old male crossbred gelding who lives in stables with other horses in the south of Fuerteventura.

The responsible family contacted us urgently because they noticed that Atila was foaming at the mouth and nose, was choking and was in a lot of pain. On inspecting the area to assess what could have happened to him, they found a few sticks lying around and a bucket of “beetroot” open with more than half of its contents missing.

The “beetroot” is a concentrated equine feed in the form of dehydrated pellets, which must be left overnight to hydrate in water and then the excess drained off. Attila had ingested approximately 3 kg of this product directly from the unhydrated container, and when it came into contact with his saliva and gastric juices, it began to produce the foaming and choking reaction that is the reason for the consultation.

Oesophageal obstruction in horses, either by food as in this case, or by a foreign body, is much more common than we might think. The oesophagus of horses is a muscular-membranous tube that connects the pharynx with the stomach, having a thoracic part and an abdominal part, and can measure between 1.2 and 1.5 metres, and therefore, taking into account the curious nature of horses, it is common for them to ingest something that along this route can cause some kind of obstruction. 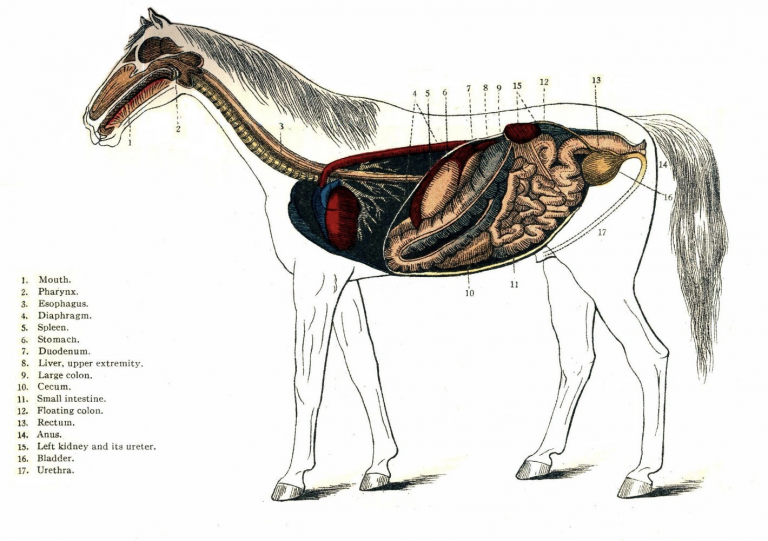 Although it is true that there are some predisposing factors such as anxiety about food, rapid ingestion of food after exercise, dehydration, inadequate chewing of food due to an imbalance in the dental table… Our work as clinicians will be not only to solve the obstructive problem, but also to study the possible factors that have triggered the presentation of this pathology in order to prevent it in the future.

The symptomatology that characterises this process considered to be an emergency is as follows:

The reason why it is considered a clinical emergency is because there is a significant risk of death by asphyxia due to pneumonia when part of the reflux is aspirated.

The diagnosis is made by observing the symptoms described above, and it is important to rule out the presence of a foreign body in the oral cavity, so the first thing to do is to assess this possibility. Likewise, during the examination, palpation of the jugular groove should be performed to look for the presence of an abnormal mass that may be compatible with the foreign body, without pressing or attempting to displace it to avoid rupture. It is possible that crepitus or cellulitis may be detected during this palpation, which should lead us to think of a possible perforation of the oesophagus, which greatly complicates the evolution of the case. Complementary diagnostic techniques such as ultrasound, endoscopy or plain or contrast radiography can be used.

The prognosis of the case will depend on the nature of the object that is performing the function of a foreign body and the speed with which the owner’s family contacts the patient.

The therapeutic approach in this case, after examination, begins with nasogastric catheterisation in an attempt to remove as much of the contents of the obstruction as possible, before it can cause aspiration pneumonia and death by asphyxia. We will never push too hard with the tube. In some patients who may be particularly nervous about this manipulation, sedation may be necessary. The simple removal of the contents by means of the tube, without even performing any type of lavage, is already accompanied by an evident improvement in the patient’s clinical signs, as the decompression produces a great deal of relief.

NOTE: Nasogastric probing in horses consists of the introduction of a tube through one of the nares until it reaches the pharynx. At this point we force the horse’s neck to flex so that it swallows the tube and enters the oesophagus (the trachea is dorsal to the oesophagus and we do not want the tube to enter there…). Once swallowed we will have entered the oesophagus and we will have to continue until we enter the stomach. Sometimes it is possible that passing the tube through the nasal turbinates can cause them to break and therefore produce profuse bleeding from the nostrils (epistaxis). We always warn that this can happen so that owners do not panic. In this particular case, even though it was all forewarned, one of the owners fainted and fell flat on the floor at the sight of the blood….. But in reality it is a self-limiting bleeding that ends up stopping on its own after a few minutes and does not affect the evolution of the case at all.

Little by little we advance with the probe, diluting and washing out the contents of the oesophagus. Once the tube has been inserted into the stomach, our aim is to wash out the stomach with the intention of removing all the contents that have accumulated and are causing the patient severe pain. To do this, thanks to a pump, we introduce a controlled amount of warm water through the probe, walk the patient, and then, using negative pressure, we extract the contents introduced and observe how the contents gradually come out, which in turn gives us a lot of information about the patient’s condition.

We accompany our catheterisation and lavage with analgesic and anti-inflammatory treatment to relieve the patient’s pain, intensive fluid therapy to combat dehydration, as well as the use of drugs with antispasmodic action.

In addition, once the stomach has been pumped out, we can leave a controlled amount of paraffin and electrolytes in the stomach in order to provide electrolyte support to the patient and help resolve any small obstructions that may have continued through the gastrointestinal tract.

In the event that the foreign body could not be dissolved or displaced by probing, the approach must be surgical by performing an oesophagotomy, and therefore the patient must be transferred to a veterinary equine hospital.

Once the situation has been controlled and the process has been reversed, it is important to monitor the patient’s oesophagus, as it is possible that what are known as stenotic rings have been generated, which are small areas of the oesophagus that have become hyper-dilated due to the presence of the obstruction, leaving the possibility of small remnants of food accumulating and causing damage in the future. The technique of choice for this type of check is oesophagoscopy.

It is recommended that horses that have suffered this type of episode eat their ration at altitude to avoid the possibility of new obstructions due to the movement of the neck during the ingestion of the feed.