A few weeks ago we had to deal with a very special case. A Pug Pug puppy swallowed an earring whole. We can tell you that everything went well and the little one is as great as ever. But this case will help us to talk about an issue that is common in many homes:
What happens when a pet swallows a dangerous object?
The first thing to do is to stay calm and carry out the necessary diagnostic tests to find the exact position of the target.
In the case of this puppy, we first performed a series of x-rays which helped us to verify that the earring in question was lodged in the stomach. 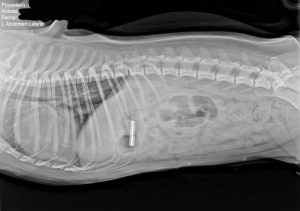 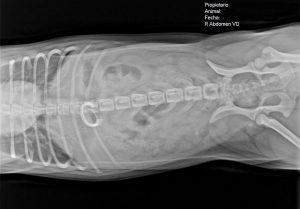 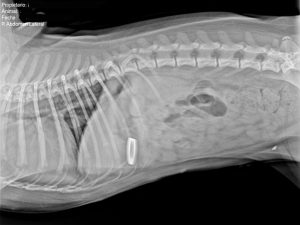 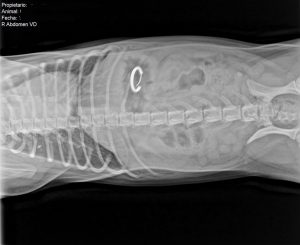 After the tests and the examination, the little girl seemed to have no damage, but the aim was to remove it as soon as possible so that it would not damage anything in its path.
As soon as possible we looked for an operating theatre in order to remove the earring by endoscopy, that is, by introducing a camera that would guide us to the earring and allow us to remove it.
Before going into the operating theatre, we performed another ultrasound scan to check if the earring was still in the stomach or if it had moved and, fortunately, it was still there. 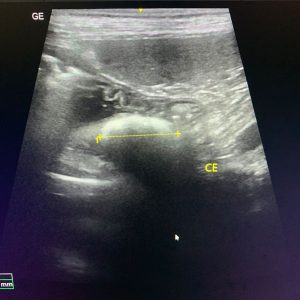 Finally, and thanks to the collaboration of our colleagues from Centro Veterinario de Mínima Invasión Canarias. Thanks to them we were able to solve it in a non-invasive way by means of gastroduoendoscopy, we extracted the earring and checked that the object had not caused injuries in any organ. 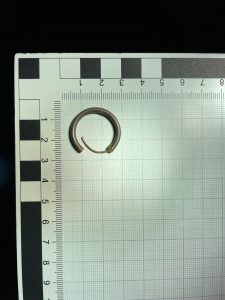 If you would like to see how the camera went through the little girl’s body until it found the earring, here is the full video of the endoscopy (please note that it may contain sensitive content):